News that the South Africa C19 variant ‘501Y.V2’ is spreading in Jeremy Hunt’s home patch of Surrey is deeply worrying. The Prime Minister has said, “We’re confident that all the vaccines we’re using provide a high degree of immunity and protection against all variants”. The scientific evidence for that statement is not clear.

'The Prime Minister declares, “We’re confident that all the vaccines we’re using provide a high degree of immunity and protection against all variants”. The scientific evidence for that statement is not clear.' Click To Tweet

'These data also have implications for the effectiveness of SARS-CoV-2 vaccines, which are principally based on immune responses to the spike protein.' Click To Tweet

Following these dramatic developments, the fundamental questions are: (i) the risk of escape mutations, (ii) the need for speed, and (iii) continuing “unknowns” about our current vaccination strategy.

Escape Mutants – and why we’re all in this together

There has been a competitive scramble for vaccination amongst wealthy countries which have the money to buy the expensive mRNA vaccines developed by Pfizer-Biontech and Moderna. Recent competition for the Astra Zeneca vaccine has bordered on international hostility, with the EU threatening to blockade exports to the UK.

Most of these wealthy countries support a phased distribution of vaccines within their own borders which prioritises healthcare staff and people at high risk.

However, the WHO has pointed out that a pandemic can only effectively be controlled if the entire world is vaccinated, and have therefore proposed the COVAX model for equitable distribution of the vaccine worldwide. The journal Science has published an alternative ethical framework for global vaccine allocation based on reducing premature deaths, reducing serious deprivation and returning to a fully functional society. 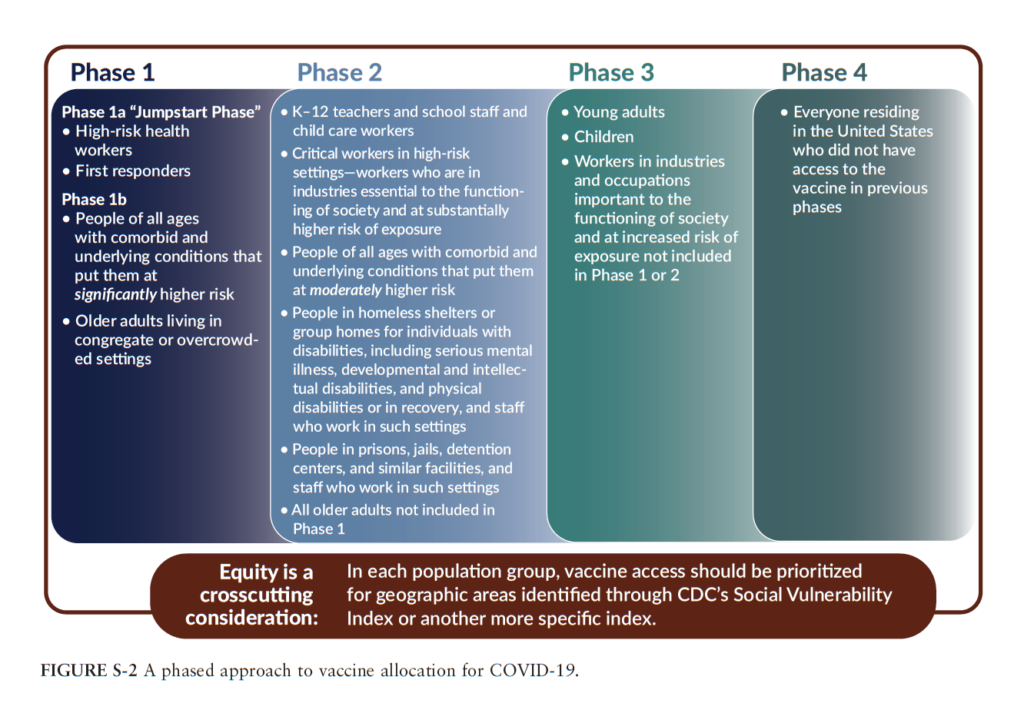 What nationalist sentiments fail to take account of is that a global pandemic requires a global solution, and that high-income countries like the UK remain at risk if we fail to deal effectively with C19 not only in the EU but also in low-income countries like South Africa. RNA viruses mutate, it’s something which comes naturally to them. In fact, genomic analysis of almost 50,000 Covid samples has shown an average number of 7 mutations per sample.

Several C19 strains have developed worldwide since the original 19A viral clade from Wuhan in China. Most of the first strains are the result of random genetic drift – there was little selection bias in favour of more prolific strains because the virus had not encountered any immunity. The original fear was that once we started vaccinating large numbers of patients who mounted a poor immune response – such as the elderly and patients with cancer – we would encourage the evolution of escape mutations. This mechanism was demonstrated in UCLH with a cancer patient who developed an escape mutation after being treated with convalescent plasma.

However, another fear exists: That in an increasingly interconnected world, vaccines which were designed to protect against viral strains in the USA and Europe, may not protect against viral strains from other parts of the world. We may be about to confront these fears with recent reports of the 501Y.V2 South Africa strain being identified in Surrey. However, regardless of the outcome of 501Y.V2, there is a very tangible risk of leaving the developing world unvaccinated. The UK has world-class surveillance systems and regularly sequences over 1000 genomes daily, but how late would the world find out about escape mutations arising in countries with inadequate surveillance systems?

The quantification of that risk is a judgment call, but the healthcare and economic consequences are potentially catastrophic if wealthy countries were to promote C19 selection bias by fully vaccinating their own populations and leaving hundreds of millions of people in poorer countries partially vaccinated. The bottom line is that – as well as the UK’s priority to vaccinate its own high risk populations – we all have to work together to eradicate C19 worldwide.
'The consequences for wealthy countries are potentially catastrophic if they promote C19 selection bias and Escape Mutants by fully vaccinating their own populations and leaving poorer countries partially vaccinated.' Click To Tweet

Fast may be better than best

The long-term outcome of Brexit remains to be seen, but vaccine strategy provides one example of the UK’s ability to be agile and decisive as a newly sovereign nation. The UK moved fast, and its health service is accelerating vaccine roll-out through its high risk populations. The advantages of this cannot be over-stated. Computational modelling published in the American Journal of Preventative Medicine predicts that even a vaccine with 50% effectiveness will prevent more cases and place less burden on healthcare provision than a later vaccine with 80% effectiveness. In short, speed may be everything. 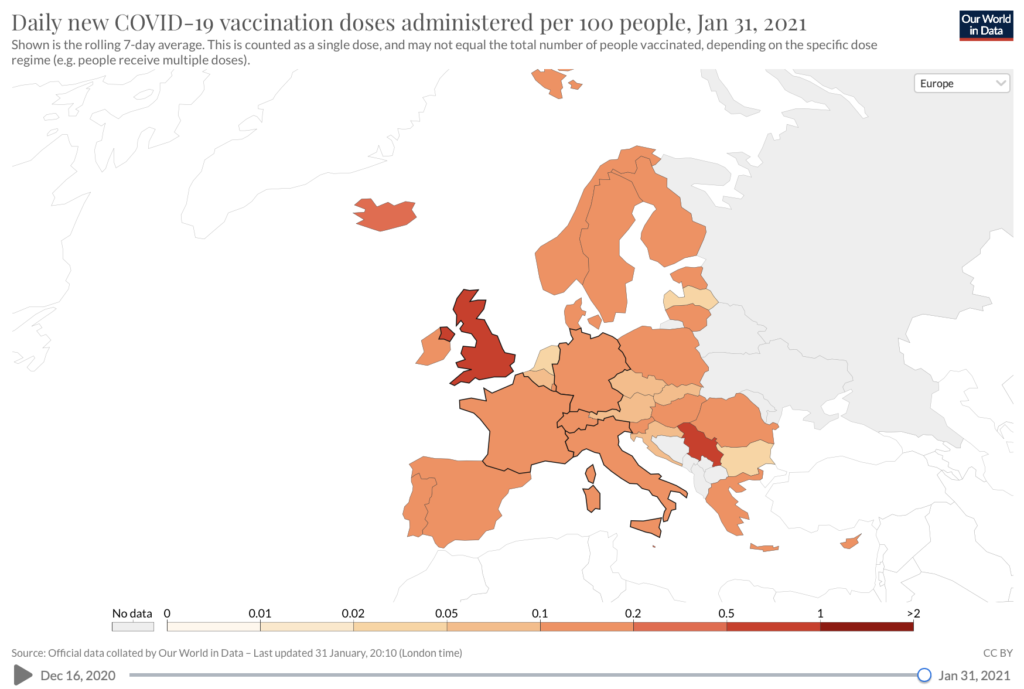 Of course, computer models can never fully account for the complexity of real-life biological systems, and one of the problems of C19 is that we really don’t have sufficient long-term data on protection afforded by C19 antibodies following infection or vaccination.

T cells can be cytotoxic and kill invasive organisms directly, but other T ‘helper’ cells can activate B cells, and B cells establish immunological memory by differentiating into mature plasma cells which secrete antibodies.

It’s more complicated than that (for instance, T cells can also have memory!) but essentially most of the vaccines developed against C19 rely on B cell memory and “neutralising” antibodies which are primed and specific to C19.

The uncertainty around antibody response has been the subject of much debate in the UK and around the world. The British Medical Association has raised valid concerns about the UK’s decision to postpone a second vaccine dose by 12 weeks, but vaccine experts at both the Joint Committee on Vaccination & Immunisation and British Society of Immunology have validated the UK Government’s approach.

Hard choices have to be made. Pfizer-BioNTech have said they have no data to for long-term effectiveness if the second dose is delayed, and that’s undoubtedly true, but at the same time it’s worth looking again at their primary data. It’s important to note that the phase I/II trials showed a massive increase in C19-neutralizing titres on giving a second dose of the vaccine, but the authors of that study said themselves “Because the titre at which human neutralizing antibodies are protective remains unknown, these findings are not proof of vaccine efficacy. Efficacy will be determined in a pivotal phase III trial.”

Regarding Pfizer-BioNTech’s phase III trial, this is the data they have published on the efficacy of the first and second vaccine doses:

Pfizer’s narrative is that if you evaluate vaccine compared to placebo from the day of first vaccination, then the first vaccine is 52% effective, but day 0 to 21 is not a biologically sound time interval. Looking at the graph again, it’s clear that vaccine and placebo show similar outcomes until about day 12 (this could be due to the emergence of early undetected pre-vaccinated infection, or it could reflect a delayed antibody response to vaccination), but if you look at the data from day 12 onwards, then there’s a significant difference between vaccine and placebo (certainly much more than 52%) after the first vaccine dose. What we don’t know – because the phase III trial was not designed to answer that question – is how long this effect lasts for.

What we still don’t know

The C19 vaccine trials have been impressive and indeed unprecedented in scientific history, but they leave significant gaps in our knowledge. Every trial is limited by its design, and the most important thing to understand is that the vaccine trials had a primary end-point of C19 infection of any disease severity. They don’t tell us about reduction in mortality or reduction in transmissibility of the virus. It’s also worth remembering that one third of infections are asymptomatic, and we need to know much more about the impact of vaccination on these potential disease carriers.

Secondly, the vaccines are delivered parenterally and induce a systemic response with circulating antibodies, but these antibodies may not transfer into mucosal secretions. More work is needed to study the mucosal antibody response in the respiratory epithelium which is presumably the site of entry of COVID-19 viral particles.

Thirdly, we need to know much more about how effective these vaccines are for those who are most at risk of overwhelming infection. Given that we know that a low lymphocyte count and T cell anergy (“tired” T lymphocytes)  are markers for disease severity, and that C19 seems to have worse consequences for the elderly and immunocompromised, it would be interesting if vaccine providers did more basic research on how their vaccines affect anergic (“tired”) T cell populations in the elderly.

However, perhaps the most important question we need answered now is whether the vaccines being rolled out across the UK and EU confer protection against the new South Africa variant we suddenly find in our midst. Recent evidence from the Novovax and Johnson & Johnson trials raises significant concerns, and the UK Government’s rapid response today shows that they’re worried too.