In 2017, NHS England submitted one of the most significant documents in its history to the Chief Medical Officer – the NHS Surge and Population Triage briefing paper. 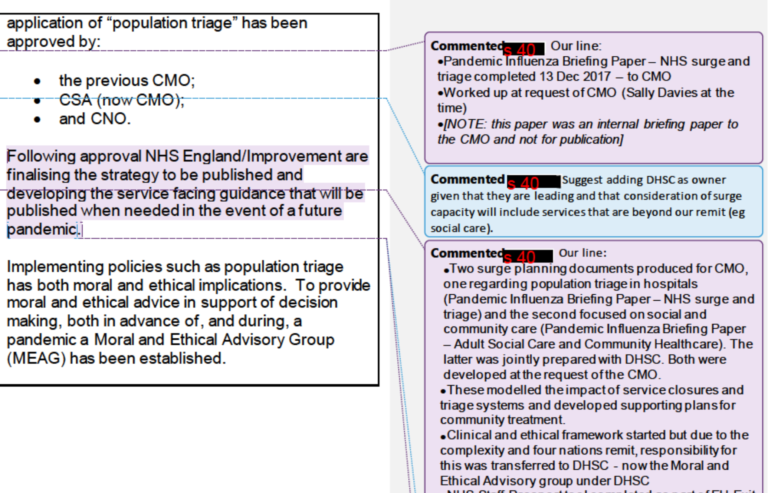 Some argue that the NHS makes choices about what and who to treat all the time. This is an incorrect argument. Population triage is not “normal” for the NHS, it isn’t the same as the NHS denying a treatment which is ineffective or too costly. Population triage is where the NHS denies an intervention which could easily save a patient’s life at no great cost, because its “surge” capacity has been degraded to the point where it cannot withstand any significant excess in demand.

An ethical and legal minefield for healthcare professionals

Clearly the Population Triage document of 2017 had enormous ethical implications for NHS healthcare professionals. We have been trained to promote equality by providing high quality care for all, but population triage capsizes the normal ethical framework which guides NHS practice.

For instance, what will doctors do when a patient with 60% chance of survival occupies a ventilator, if all ventilators in a unit are taken and that ventilator is urgently required by three patients with 80% survival? Will we withdraw life-saving care from a patient who could reasonably be saved? Will we hold a lottery to decide which of the three patients then occupies the ventilator? What will the ethical implications and legal consequences of such decisions be?

We know that NHS England’s Emergency Preparedness, Resilience & Response team met with the BMA Ethics Committee in December 2016 and discussed these important questions.

However, if the BMA’s involvement in the population triage protocol raises questions, what can we say about the conduct of NHS England and the Department of Health? The guideline for the most serious and most likely threat to the NHS was disgracefully kept secret from the people who fund the NHS – the British taxpayer. There was no excuse for this secrecy. Even the Government’s own guidelines on civil emergencies reads “research shows that the public have an appetite for information and are more likely to be alarmed if they feel that they have insufficient information“.

The decision to keep the Population Triage document under wraps, like the decision to keep the findings of Exercise Cygnus secret, had no rationale based on the public good. It simply covered up the systematic degradation of our national healthcare infrastructure, for instance obscuring the fact that we had less than one third intensive care capacity as compared to Germany.

'The decision to keep the Population Triage document and the findings of Exercise Cygnus under wraps had no rationale based on the public good. It simply covered up the systematic degradation of our national healthcare infrastructure.' Click To Tweet

An abdication of leadership

In the absence of national leadership, it has fallen to small groups of experts to propose their own triage protocols. For instance, a group from the Royal United Hospital Bath NHS Trust have published a structured process of fair allocation of critical care resources in the setting of insufficient capacity. This is an intelligent and well-intentioned effort to address a pressing need, but it is not even official policy for Bath NHS Trust, and it cannot replace the need for a national framework to address the pandemic.

Essentially, this represents a colossal abdication of leadership at the top of both the Department of Health and NHS England. The Nuffield Council of Bioethics has called for a national policy and offers some useful imperatives: the policy needs to be coordinated, communicated clearly to healthcare professionals and the public, authoritative, clear and definitive, robust, transparent, consistent across the healthcare service, and triage decisions should be seen to be both fair and credible.

The consequences of secrecy

Jeremy Bentham once said, “Secrecy, being an instrument of conspiracy, ought never to be the system of a regular government”. The trouble with concealment built on political cowardice is that it inexorably leads down a road of deception upon deception. First the findings of Exercise Cygnus were kept secret. The Population Triage document which followed then had to be concealed. Then even when it became clear that a major pandemic had spread to British shores, a decision was made to deprive healthcare professionals of data from a national exercise which had been carried out precisely to prepare the UK’s emergency pandemic response.